KeystoneCare Recognizes Veterans for Their Service 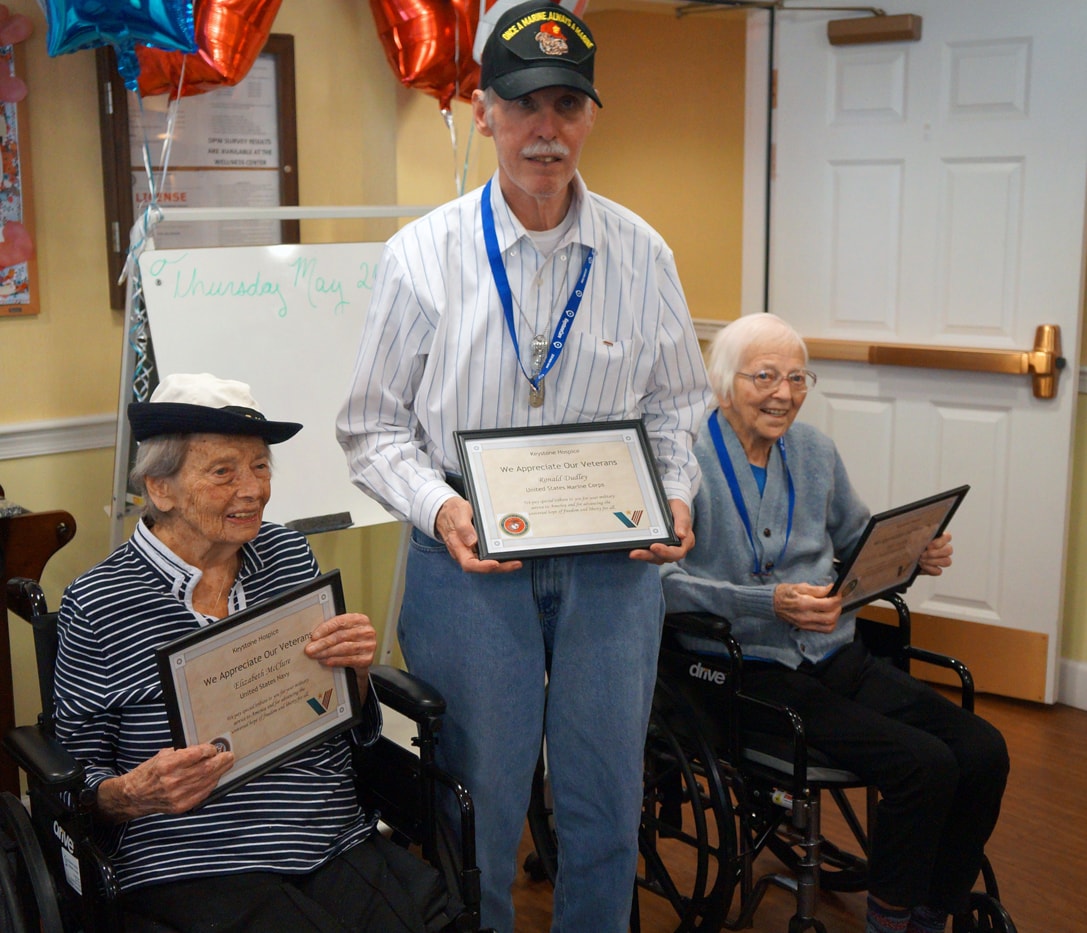 Bryn Mawr, PA- KeystoneCare awarded a certificate and pin to three residents May 26th at Impressions Memory Care in Bryn Mawr Terrace in recognition for military service. KeystoneCare is part of the “We Honor Veterans” program and coordinated this recognition with Bryn Mawr Terrace. The resident veterans were presented with a certificate and a commemorative pin to recognize them for their military service. Family members were also present to share military stories.

Ronald Dudley, 69, wore a hat that read “Once a Marine Always a Marine,” along with his military dog tags to show his love and devotion for the US Marines where he served for over 30 years before retiring in 1994. A Vietnam-era veteran, Dudley served in the Reserves and was the youngest to reach the top rank as an Administrative Officer of Marine Air Battalion (MAB) 49 at the Willow Grove Air Base.

Rita Jacob-Leadem, 93, was greeted with hugs and kisses by family and staff as she received her honors. Jacob-Leadem, born in Germany, was in the United Nations Relief and Rehabilitation Agency (UNRRA) as a registered nurse at the end of World War II. UNRRA was founded in 1943 to provide relief for war victims through providing food, shelter, medicine, and other necessities. Fluent in German, she traveled to liberated cities throughout Germany to administer aid, medical care, and shelter for displaced children.

Elizabeth “Betty” McClure will be turning 100 years old on August 30th, and she said that she was ready to put back on her uniform on a moment’s notice. McClure wore her U.S. Navy hat and proudly saluted as she was recognized. Born and raised in New York City, McClure worked as an executive secretary for the Standard Oil Company and attended night school at Columbia University. After the start of World War II, McClure left her job to volunteer for the United States Navy. She was stationed at Naval Hospital Camp Lejeune, North Carolina, and served as a Pharmacist Mate. During the war, the hospital held over 2,000 patients.

KeystoneCare is a partner of We Honor Veterans, a national program developed by the National Hospice and Palliative Care Organization. As a partner, KeystoneCare serves and recognizes veterans through the resources provided as part of this program and integrates best practices for providing end-of-life care to veterans. By recognizing the needs of our nation’s veterans who are facing life-limiting illness, KeystoneCare is able to accompany and guide veterans and their families toward more peaceful end-of-life.

KeystoneCare is a nonprofit home care and hospice provider offering services, regardless of income or insurance, in the Philadelphia region. Services include home care, telehealth services, palliative care, comprehensive in-home hospice care, residential hospice care in Keystone House, and private duty care for people without health issues but in need of support to maintain their independence. Keystone Hospice was founded in 1995. The KeystoneCare administrative offices are in Wyndmoor, Pa.

Copyright 2016 KeystoneCare is licensed by the Commonwealth of Pennsylvania, and accredited by the Community Health Accreditation Program (CHAP). Modality Theme powered by WordPress